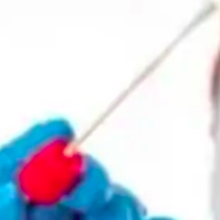 Last week I wrote about the horrific contamination of PCR test swabs discovered in testing products of a Chinese manufacturer.

To remind you, here is an electron microscope photograph of what is being inserted into the noses of those of us exposed to the Chinese manufacturer’s swabs. Be ready to be shocked.

This swab appears to be made of fiberglass. Or at least to have a fiberglass coating. This, of course, could rip, cut, and tear flesh, causing bleeding. Broken pieces could become lodged in the nose causing infection.

To determine if such contamination was related only to that one manufacturer, I searched for similar results for other swab products. And yes, diving into search, I again found something immediately that caught my eye.

Additional frightening research findings by molecular chemistry and pathology experts. Here is the report. It relates to a South Korean manufacturer that provides much of the EU with PCR swabs.

This additional study concludes that material and chemical abnormalities in the material at the tip of the swab (produced by a South Korean manufacturer) are likely responsible for damage to the nasal passage, resulting in bleeding and other injuries. Here is part of this additional (second) study:

In some spots, the concentrations of aluminum and silicon were as high as 7.25% and 14.06%, respectively.

The base matrix appeared to be nylon with inorganic ingredients mixed in. Aluminum and silicon can both present health hazards, and this can explain the rapid-onset nasal bleed and strong and lasting adverse reactions reported by the tested individuals.”

One of the striking things about the horrific test results is that they are basically the same as those of the Chinese product of which we reviewed the testing last week.

The manufacturers are in different countries and have no known public connections.

So how is it possible that the same results of dangerous contamination of a supposedly 100% nylon test material are the same?

One possibility that could be imagined is that the Korean company is purchasing the product in China and selling it as their own to the EU and other Western countries. No one is claiming this is happening, but it is a possibility.

Another possibility is that there is a supplier of this nylon material that supplies both the Chinese and Korean companies.

But whatever the cause of the contamination, it exists and is widespread.

A third study clarifies that this is a rampant problem. In this study, a totally different set of contaminates was discovered in the swab collection material by a third manufacturer.

According to another independent test on PCR swabs in Slovakia, the material they found was Darpa patented hydrogel, lithium, and nylon. DARPA relates to materials normally used for military purposes.

Here is part of what this third test found:

” After spawning a mixture of nylon fiber fragments, Darpa Hydrogel remains on the nasal mucosa under the pituitary and pineal gland along with lithium. This mixture immediately reacts with living structures to form crystals that are directionally oriented to the pineal gland, which has its own electromagnetic field.

According to the article, lithium, as well as aluminum and mercury (widely used in vaccines), are highly toxic to the pineal gland influence. In low doses, lithium blocks it, and in higher doses, it can completely destroy it.

” Darpa Hydrogel and lithium, block and destroy the pineal gland and cause the thinking person to become a controllable biorobot. A hydrogel is a carrier of an active substance, its task is to get the substance into the body at a pre-desired place.” – see shocking photos: Nutritruth.org.

Interestingly, Ivermectin which has been found to be an effective, safe treatment for Covid, dissolves the Hydrogen crystals.”

A term used by the Fascistic Left to suppress what is often actually true!

The term “conspiracy theory” is a language weapon of the fascist Democrat Party and its media slaves, to silence what is often accurate information.

There have been occasional articles throughout the pandemic, about PCR swabs being used as a bioweapon to sicken enemies of whatever country was producing biologically infected swabs. In addition to biological infection, the “conspiracy theory” articles mentioned the presence of metallic micro-flakes as cutting edges. The purpose of which is to damage flesh, causing bleeding, infections, and possibly brain damage. And these “conspiracy theory” metallic micro flakes are actually appearing in the studies mentioned in this post.

The tested swabs are in use in the EU, and have the CE quality mark, as meeting EU standards. Which clearly, they do not.

It’s horrific to think of some of us who have stood in long lines to get PCR tests, that we were waiting in line for injury. The entire government pandemic narrative is warped. It’s time to break free.

Check the swab packet and you will find letters EO in a black square box.

I work on refineries with “Ethylene Oxide” catalyst reactors and wear full breathing apparatus because it’s a major carcinogen.

One swab in the nose and back of the throat forces EO ppm into your mucus membrane where unknown ppm remains in the body.

However multiple swabs, every few days over time, increases ones critical ppm exposure levels that exponentially increases cancer risk, from now until ones immune system naturally deteriorates with age (this goes with any carcinogen we put into our bodies eg smoking) BUT EO massively increases cancer risk to all in medical and other industries (jabbed or not) who are forced to test by employers, every 3 days (ca.120 x per year!!) Their PPM exposure level is through the roof.

There is no discernible, empirically measured benefit between a swab up the nose/throat -V- Saliva test to measure results of an already flawed pcr method.

By exposing billions of people to ever increasing EO exposure levels by forced swabbing will only show increased cancer levels (hopefully not) between now and 5/10 years. Providing a non-suppressed, global process can be implemented which can accurately follow up, measure, monitor and record data that is then shared with a decentralised, non corrupt, “trust less” database management entity. Thinking specifically blockchain !

That said ALARA ( as low as reasonably acceptable) shouldn’t really come into it. Should swabs be deemed absolutely necessary (many countries are now abandoning this entire protocol and living with it all) I’d recommend to Senate should you get another opportunity that all such tests revert to saliva based and not nasal/throat swabs, which to most is extremely uncomfortable, extremely stressful and wilfully and unethically inserts a known carcinogen more times than has ever been tested into the bodies of all ages ! Why, when saliva works just as well!

Hope this is helpful to all – please forward to your loved ones.