Did You Know That A 2021 Report Predicted The Monkeypox Outbreak On May 15th 2022 ? Both Companies Involved In The Report Have Received Millions From The Bill & Melinda Gates Foundation.

In March 2021, the National Threat Initiative (NTI) partnered with the Munich Security Conference to conduct a tabletop exercise on reducing high-consequence biological threats. The report focused specifically on a Monkeypox outbreak.

This tabletop exercise can be added to a long list of other pandemic table top exercises. In a previous thread that I wrote back in November 2021 (before my twitter account was banned) I wrote a thread entitled “Who Are The Johns Hopkins Center for Health Security And Why Did They Publish A Document Called The SPARS Pandemic 2025-2028”. In that thread I spoke of 4 pandemic tabletop exercises that have taken place over the last twenty years such as Operation Dark Winter, Atlantic Storm, Clade X & most famously Event 201.

We now have another one that we can add to the list called “Strengthening Global Systems to Prevent and Respond to High-Consequence Biological Threats”. Open Philanthropy funded the report. One of its main funders is Dustin Moscovitz who founded Facebook along with Mark Zuckerberg.

The Nuclear Threat Initiative (NTI) has also received $3.5 mil from The Bill & Melinda Gates Foundation in the name of Vaccine Development.

On September 20, 2017, the Nuclear Threat Initiative (NTI) and the World Economic Forum (WEF) hosted a roundtable discussion on the current landscape of biological risks presented by technology advancement in the context of the FourthIndustrial Revolutionhttps://www.nti.org/news/nti-and-world-economic-forum-partner-discuss-biological-risks-posed-advances-technology/Fast forward 3 years and in January 2020, NTI and the World Economic Forum released a report called “Biosecurity Innovation and Risk Reduction: A Global Framework for Accessible, Safe and Secure DNA Synthesis”https://www.nti.org/wp-content/uploads/2020/01/Biosecurity_Innovation_and_Risk_Reduction.pdfFrom the World Economic Forum press release they speak of“Rapid advancements in commercially available DNA synthesis technologies – used for example to artificially create gene sequences for clinical diagnosis and treatment – pose growing risks, with the potential to cause a catastrophic biological security threat if accidentally or deliberately misused”https://www.nti.org/news/nti-and-world-economic-forum-release-new-report-dna-synthesis-technologies/Now that we’ve established who is funding these reports let’s have a closer look at the 2021 report itself which predicted the Monkeypox outbreak (and yes the exact date is predicted in the document)

https://www.nti.org/wp-content/uploads/2021/11/NTI_Paper_BIO-TTX_Final.pdfOn Page 6 of the 36 page report in the Executive Summary it says“The exercise scenario portrayed a deadly, global pandemic involving an unusual strain of monkeypox virus that emerged in the fictional nation of Brinia and spread globally over 18 months. Ultimately, the exercise scenario revealed that the initial outbreak was caused by a terrorist attack using a pathogen engineered in a laboratory with inadequate biosafety and biosecurity provisions and weak oversight. By the end of the exercise, the fictional pandemic resulted in more than three billion cases and 270 million fatalities worldwide”Discussion among exercise participants led to the following key findings:

To address these findings, the authors developed the following 5 recommendations.

What is especially interesting about these recommendations is the role the UN, WHO and Banks will have to play (all are mentioned in the report). This seems like a direct nod to the WHO Pandemic treaty which is being discussed at the World Health Assembly May 22-28.https://www.forbes.com/sites/brucelee/2022/05/18/the-who-to-discuss-global-pandemic-treaty-at-world-health-assembly-may-22-28/Isn’t it interesting as well that the World Economic Forum 2022 meeting is also taking place from May 22-26.I mentioned earlier the exercise participants in the tabletop exercise but who are they. It will come as no surprise that it was the usual runners and riders which coincidentally were involved in Event 201. Here are just a few from Page 9..Dr. Michael Ryan, Executive Director, WHO Health Emergencies ProgrammeDr. Ruxandra Draghia-Akli, Global Head, Johnson & Johnson Global Public Health R&D Janssen Research & DevelopmentDr. Chris Elias, President, Global Development Division Bill & Melinda Gates FoundationSir Jeremy Farrar, Director Wellcome TrustMost fascinating of all though was the predicted date from the document of the Monkeypox outbreak (Page 9). Funny how unerringly accurate they are with their predictions. Just a coincidence of course.

The report also speaks of future triggers. Page 17 “In national pandemic response plans, specific readiness measures would be “triggered” based on factors related to the potential severity of the outbreak, expected delays in situational awareness, and the time it would take to implement response measures and see results”As was evident in Covid yet again they speak of flattening the curve, using mask mandates and ceasing mass gatherings as well as health screening measures for travel (vaccine passports).“Although triggered actions would vary depending upon the particular needs of the country, in most cases the goals are the same: slow the spread of disease to buy time and flatten the epidemiological curve, while using that time to scale up public health and medical systems to keep up with growing caseloads and save lives. NPIs such as mask mandates and ceasing mass gatherings were deemed to be critical for blocking chains of disease transmission. Participants generally did not endorse travel restrictions such as border closures, but travel health screening measures were viewed as valuable”One other coincidence I noticed in the document is the address of the Nuclear Threat Initiative in Washington. 1776 Eye Street. Wasn’t 1776 the date of the American Declaration Of Independence. The document is also 33 pages long but maybe that’s another coincidence and a discussion for another day. Make of it what you will.If anybody thinks these pandemic tabletop exercises are a coincidence they need their head examined. This is far from over 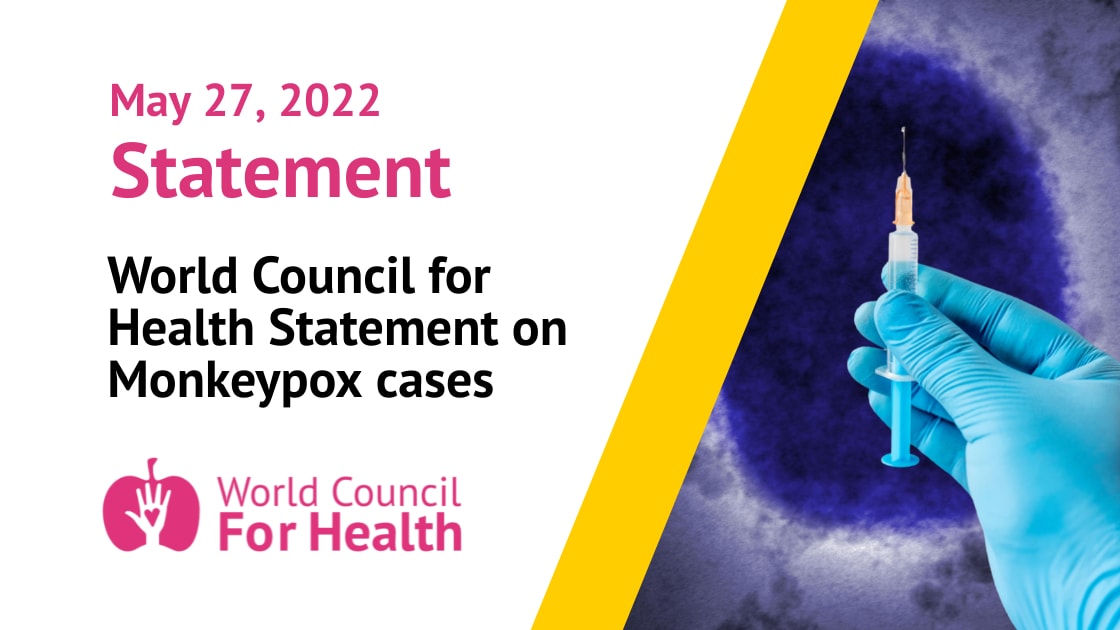 The World Council for Health notes that non-scientific speculation on recent monkeypox cases by the WHO is being used to justify further human rights violations together with a roll-out of new and experimental smallpox vaccines.

Join us in the WCH Newsroom this Monday, May 30, 2022 to learn about this emerging story. Subscribe for updates.

Imagery of people infected with monkeypox being used by global media, most of which has been derived from old CDC and Getty Images, is not representative of current international cases of monkeypox. No death cases out of Africa have ever been reported and the dangers reported in the media are exaggerated.

The World Council for Health notes that the United States and the United Kingdom have been stockpiling smallpox vaccines, and the state of Quebec in Canada is already planning to vaccinate people with a smallpox vaccine to contain the supposed spread of monkeypox.

There is no rational scientific basis for vaccinating for smallpox to prevent monkeypox and, among people already multi-vaccinated with experimental covid-19 vaccines, this strategy has potential to do great harm. More and more evidence surfaces that the immune system of the covid vaccinated people has been impaired making them more susceptible to potential harm from a live vaccine. Classical public health interventions (like isolation and quarantine) have demonstrated in the past that they are efficient measures.

Furthermore, PCR tests have serious limitations as a method for diagnosing disease and should not be used to diagnose monkeypox, which is clinical diagnosis. There are many other conditions that meet the WHO’s current case definition of a suspected monkeypox case, including Covid-19, the common cold, and shingles – and PCR tests will lead to many false-positive cases.

The biggest threat to global health is the ongoing effort of the WHO and its private partners to vaccinate every man, woman and child with new experimental vaccines and injections that have not been adequately tested.

World Council for Health is for transparent health guidance free from political and private partnerships; we value and empower individual choice, bodily autonomy and personal sovereignty.