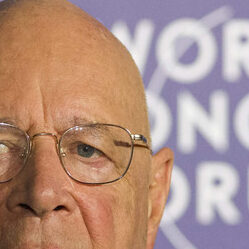 Schwab seems to have dedicated his life to reinventing that nightmare and to trying to turn it into a reality not just for Germany but for the whole world.

Born in Ravensburg in 1938, Klaus Schwab is a child of Adolf Hitler’s Germany, a police-state regime built on fear and violence, on brainwashing and control, on propaganda and lies, on industrialism and eugenics, on dehumanisation and “disinfection”, on a chilling and grandiose vision of a “new order” that would last a thousand years.

Worse still, as his own words confirm time and time again, his technocratic fascist vision is also a twisted transhumanist one, which will merge humans with machines in “curious mixes of digital-and-analog life”, which will infect our bodies with “Smart Dust” and in which the police will apparently be able to read our brains.