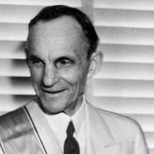 At a ceremony in Dearborn, Michigan, Henry Ford is presented with the Grand Cross of the Supreme Order of the German Eagle on his 75th birthday. Henry Ford is the first American recipient of this, an honor created a year earlier by Adolf Hitler. This is the highest honor Nazi Germany could give to any foreigner and represents Adolf Hitler’s personal admiration and indebtedness to Henry Ford. The presentation is made by Karl Kapp, German consul in Cleveland, and Fritz Heller, German consular representative in Detroit. Ford is the only American mentioned in Hitler’s book “Mein Kampf”.

The peculiar admiration that National Socialists had for Henry Ford and the supposed sympathies that the Detroit industrialist harbored for Nazism keep attracting the curious, both academic historians and internet readers. There is something irresistible about the connection between the man taken to symbolize American industrial modernity and the quintessential villains of the twentieth century. The New York Times reported that a portrait of Henry Ford graced Hitler’s Munich office 1922. Hitler acknowledged Ford in Mein Kampf and Baldur von Schirach testified in court in Nuremberg that “the decisive anti-Semitic book” he had read was Ford’s International Jew.

According to Prince Louis Ferdinand, Hitler told him over lunch in 1933 that he was “a great admirer of Ford’s” and would do his “best to put his theories into practice in Germany.” German diplomats awarded Ford a prestigious decoration in 1938. Robert Ley, head of the Nazi labor organization German Labor Front, wrote a letter to Henry Ford from his Nuremberg prison cell, days before his suicide.

We also know that Nazi engineers and industrial managers adapted technological and functional aspects of Fordism. Flow production (assembly lines and vertical integration) had considerable appeal after 1936, when the Four-Year Plan sparked renewed interest in industrial rationalization. The Volkswagen plant invoked Ford’s Rouge Factory as a model, and the German Labor Front hired Ford engineers to staff it. Finally, the Nazi-appointed manager of the airplane builder Junkers, Heinrich Koppenberg, was a vocal disciple of Ford production techniques.

Historians have proposed different understandings of the Ford-Nazi connection. Some have offered muckraking indictments of the American industrialist as a Nazi sympathizer and war profiteer. For others, the connection exhibited Nazi “reactionary modernism,” that paradoxical Fusion of technological zeal and anti-modern romanticism supposedly characteristic of Nazism. Others again have suggested a structural nexus between Fordism and Fascism. In this vein, Fordism is essentially understood as a device of capitalist control over the industrial work force. In Germany, it is asserted, Fordism only became dominant under Nazism.

But depite these interpretations, the Ford-Nazi connection still leaves us with considerable uneasiness. It fits only awkwardly into the master narratives of a historiography still dominated by national conceptual frameworks. In the American case, the status of Henry Ford as a herald of the roaring 1920’s makes it difficult to integrate his Antisemitism and indelicate political leanings into a unified appreciation of his historical role, which, in turn, creates the clichéo of the man as an “enigma.” Meanwhile, in German historiography, the juxtaposition of “Ford” and “Nazis” is still more likely to elicit ruminations about the relationship between National Socialism and modernity rather than empirical investigation.